I didn't learn a bit of Spanish, but I still managed to get As in both of my community college courses.  I sent the official transcripts to ASU, and I just learned that they conferred my B.A. in Anthropology on August 5th.

In spite of this successful milestone and my continued interest in Archaeology, I have decided to suspend my pursuit of graduate studies in the field. Instead, I am re-focusing on my current profession, i.e., embedded software design and development.

The cold, hard truth is that my financial commitments cannot be met with the pay I will find in the social sciences, but working as an aerospace engineer will pay the bills.  I love archaeology, but I also love spaceflight and astronomy.  I am attending the University of North Dakota beginning this semester, working toward an M.S. in Space Studies.  I'm also encouraging my company (a relatively small engineering firm) to pursue work in the growing Commercial Space field, and hope to be a part of humanity's journey into the solar system.

If you want to keep up with me as I take a different path, you can follow me at my new Twitter account @ElevenPointTwo, or on my new blog, ElevenPoint2.

I'm not turning my back on Archaeology, just on a career in Archaeology.  I plan to stay active in the OAC, read papers that interest me regarding the American Southwest and/or Ancient Urbanism, volunteer at local digs when I can, and attend a conference now and then.  But it is definitely being re-classified as a hobby.

I was honored to be invited to contribute to Anthropologies, which focused on archaeology as a part of anthropology.  My short essay More than Strata and Sherds appears in the May issue.
Posted by Paul Wren at 1:41 PM No comments:

I've been away for a while.

My career as a "non-traditional" student ground to a halt after the Fall 2009 semester, when I seemed to be out of viable options.  Back in September, I blogged at the OAC about abandoning my goal of a Ph.D. and instead finding other ways to work as an anthropologist/archaeologist (I included links to some excellent Applied Masters programs in the U.S.).

Even though I have not taken a course for some time, I have involved myself by attending a conference and a few lectures, continuing to read papers that interest me, and staying in touch with a couple of my professors.

I had the great fortune to observe my 50th birthday last month.  The approach and arrival of this dubious celebration triggered a "last chance" attitude for me with regard to my continued involvement in anthropology, and I decided that any action was better than no action.  Here are my current plans and options:

Hmm... so what is number 2?  Pursue a  Masters of some sort?  Get my hands dirty working for a local CRM firm part time, or volunteering with a group like SWAT?  Ok, it turns out I don't have a plan yet beyond #1.  No matter, finishing my first degree in Anthropology is a start.  I have a couple of ideas cooking that may be options, but I'll address those in a later post.
Posted by Paul Wren at 11:39 AM 1 comment:

Email ThisBlogThis!Share to TwitterShare to FacebookShare to Pinterest
Tags: goal

While attending the 2010 Mogollon Conference last October, Margaret Nelson and Michelle Hegmon presented some of their recent work in the Mimbres area (see my summaries here).

These two professors from Arizona State University had recently edited a book dedicated to the Mimbres culture, but the hardcover version was a little too pricey for me.  Mimbres Lives and Landscapes is a SAR Press publication, and they have chapter one available for download as a PDF.

Not sure how I missed it, but the paperback version has been available for a few months now.  I ordered my copy tonight, so I'll try to write up a book review as soon as I can.
Posted by Paul Wren at 9:15 PM No comments:

Michele Hegmon of Arizona State University asked us to consider the Classic Mimbres society as "Another Way of Being," and to do so through the archaeological data.  She began by contrasting the layouts of Mibres pueblos vs. contemporary structures at Mesa Verde.
Mesa Verde unit pueblos are very uniform in their overall form, and in room size and shape:  Room block, kiva, midden.  This is suggestive of lower autonomy, greater hierarchy (because someone is dictating the apparent standards).
Classic Mimbres: Less planning to pueblo layout, variation in arrangement and room size, and each household seems to be self-sufficient (every household shows evidence of processing areas  and food preparation).  In this type of community, social stability and progress depends on peer pressure to conform (example Classic Mimbres villages: Avilas Canyon, Flying Fish).
Hegmon also addressed conformity vs. standing apart.  It has been fairly easy to establish a chronology of pottery styles for the Mimbres precisely because of a consistent conformity of style within each period, and then someone stretched the rules and moved to a new design.  Mimbres pottery designs are a visual component of a shared culture, where conformity is the norm and is maintained through peer pressure, not hierarchical rule.
Hegmon also notes that there is little or no evidence of hierarchy in Mimbres burials.

She closes by wondering: "Why should modern culture care about the Classic Mimbres?"  To understand that there are other ways of being... not better or worse ways,  just other ways.
Karen Gust Schollmeyer from Simon Frasier University and Arizona State University presented her findings regarding deer hunting by the Mimbres.
She developed an excellent model for the deer population in the Mimbres area.  She simulated hunting effects on the deer, and found that if hunting removed 18% or less of the deer each year, the deer population can remain steady.  Middle Mimbres populations reached a demand level (222g, or 2 "deer burgers" per week per person) that exceeded 18%.  If she runs the simulation with 26% hunting, the deer population crashes.  Even if the hunting drops to 13% after 5 years, the deer never fully recover, instead continuing on a slower decline.
Do archaeological data support this?  Dietary stress indicators are present in the record (in the form of evidence for breaking the deer bones to get marrow) that correlate with the same period when Mimbres populations were highest.
An interesting side note: isotope analysis of deer bones from that period show that some of the deer were eating higher amounts of C4 plants (maize is a C4 plant) than deer from earlier times.  Were they eating maize grown by the Mimbres?
For more information about her ongoing research, take a look at her current projects page.
Margaret Nelson from Arizona State University (hmm... there's a trend here) gave a talk she titled  Mibres Archaeology: Then and Now.  Diversity was the theme.
In closing: The KIND of diversity we promote is as important as the simple valuing of diversity.
Nelson and Hegmon are editors of a new book from the SAR Press: Mimbres Lives and Landscapes.  You can read the opening chapter here.
Posted by Paul Wren at 6:32 PM No comments:

After leaving Phoenix at 6:00 am and discovering somewhere along the way that New Mexico is currently in a different (i.e. later) time zone, I somehow still made it to the conference in Las Cruces just in time for the first presentation following the lunch break.

Chuck Adams from the UofA kicked off a series of presentations on the use of space for rituals in the pueblos.  Adams is the director of the Homol'ovi project in northern Arizona, and addressed the evolving use of communal space at Homol'ovi over time.
He points out that these "emergent" communities (as labeled by Kate Spielmann) in the Southwest in the 13th century were using Great Kivas and Plazas for the same reason: To integrate the community.  Smaller settlements could use a Great Kiva to bring together the entire population at once, while larger communities needed to employ plazas for public sacred activities.
Just a side note: I was unaware that two of the Homol'ovi communities (Homol'ovi I and II) had more than 1100 rooms each.
Darrell Creel from UT-Austin looked further at the relationship between Great Kivas and Plazas, and concludes the plazas were more than shared domestic spaces.  At the Swarts ruin, the Great Kiva open onto the plaza.  Not such a big deal, but here was the kicker:  Of over a thousand total burials at Swarts, the vast majority were inhumations, with only a few cremations... and the cremations were exclusively buried in the plaza, while nearly all inhumations were in or around room blocks.
Posted by Paul Wren at 3:17 PM No comments:

I am attending the 2010 Mogollon Archaeology Conference at New Mexico State University this weekend, starting with the Friday afternoon sessions. 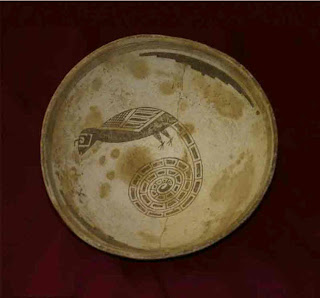 I'm planning to blog here and at the OAC about the sessions, and you might even see a few tweets.
Posted by Paul Wren at 7:43 AM No comments: